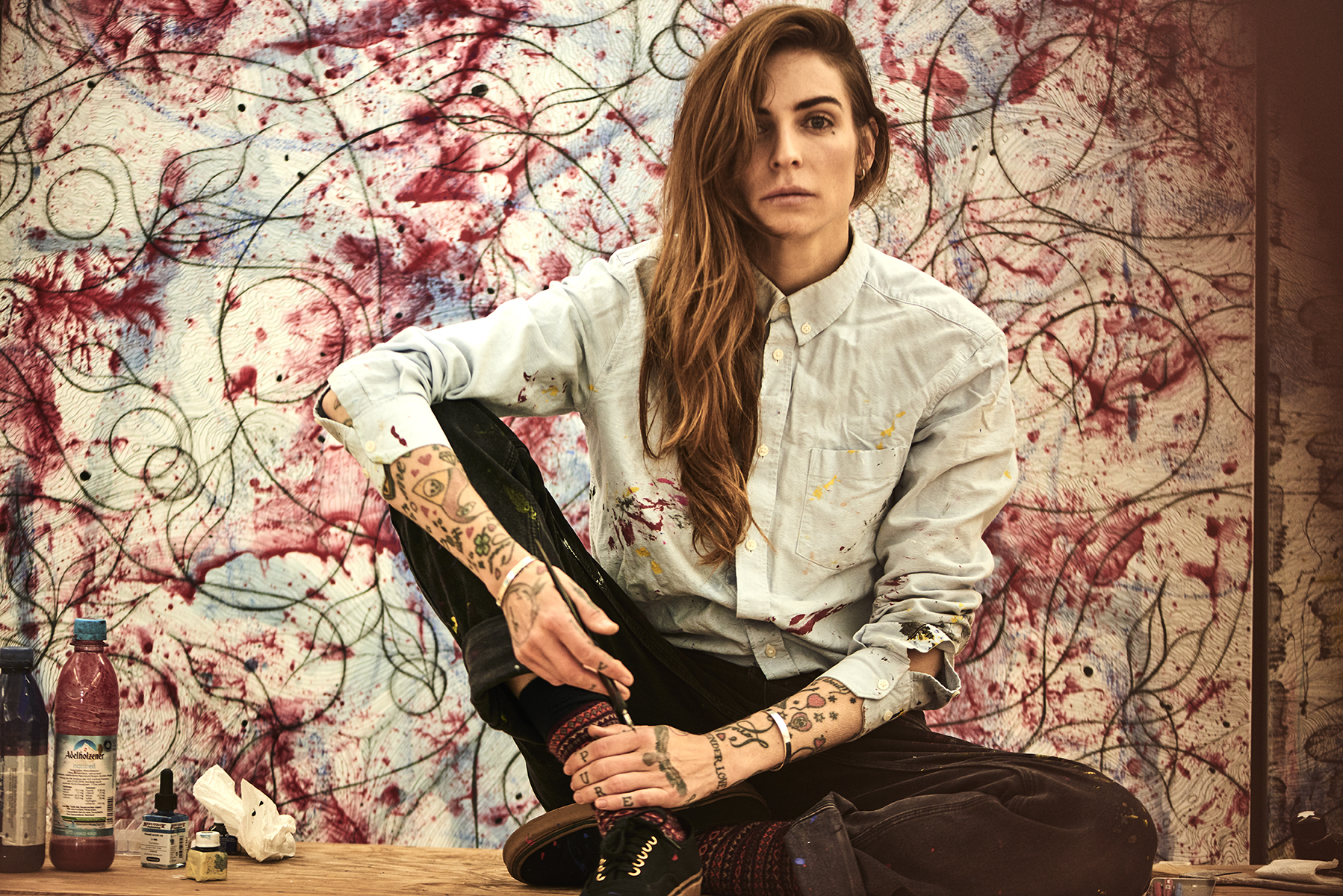 a universal language of freedom

that goes beyond any visible form

to pierce on our emotional bodies and

make us ignite to life.“

In her work, which ranges from video, drawing, and painting to installation and performance art, Roescheisen engages and nurtures investigations on a shared human, and spiritual, condition.

Building on the impact and symbolism of color in its ability to evoke human emotions, she addresses themes ranging from the self & the other, the inner & outer world, the visible & the invisible, dream & reality, while consistently suggesting shifts in perspective. Drawn to how the human body interacts with and reacts to its sensitive environment – colors, textures, and sounds – she places physicality at the root of her creative process. Her body becomes an inherent part of the artwork, both object and subject of it, whether performative or materialized. Exploring the imperceptible, she exposes the invisible, the intangible, and the inaudible’s transient yet boundless influence over our physical and emotional selves.

Roescheisen’s early work (2013—2017/18) reveals an autobiographical element, which she cultivates through the underlying concepts of iconography, poetry, literature as they manifest in Medieval art, German Romanticism, Gothic architecture, and fairy tales. In a subtle interplay between dream and reality, her work drifts between childhood and adulthood, laying bare hidden depths of human existence through diverse artistic mediums.

Her video works, considered by the artist as “paintings in motion and emotion,” are slow and deliberate. A chromatic visual tableau, her part-sculpture part-video La Pietà (2013) revisits medieval Christian iconography, all-the-while engaging with the relationship between mother and child, the construction of the self, and feminine identity. Bridging Grey (2017—2019), her most recent performance video piece, pursues this cinematic narration as she poetically and incisively repaints the world of human emotions. Weaving the gradual flow of images with musical compositions, they shape a new level of interpretation, encouraging the viewer to exist outside of space and time and retreat into his emotional self.

Emerging into a new realm of artistic freedom, Roescheisen’s recent works, predominantly drawing and painting, shift to a new form and state of artistic, and human, presence. Autobiographical motifs move to the background, and a bold and direct presence emanates from the works as they transpire a new form of emotional and sensorial authenticity.

Experimenting with pigments and minerals, her palette of vivid colors, already perceptible in her video work, continues to thrive in her work. Roescheisen delves further into the aesthetics and embodiment of color as a mirror onto human emotions. As she increasingly roots her body in her creative process, shapes and structures intuitively align on the canvas, thus composing a new visual theosophical thought. In Vibrational Strings (2019—2021), she develops a shared visual language that resonates with her viewer – one that she cultivates and deepens in her ongoing series, Flying Dragons (2020—2021). Conjuring a sense of essential strength, her new work conveys a suspension of powerful and raw tenderness, at the seam of the rational and the emotional.

Born in 1982 in Rosenheim, Germany

Annina Roescheisen is a multimedia fine artist. Her work, which ranges from video, drawing, and painting to installation and performance art, engages with the impact and symbolism of color in its ability to evoke human emotions, addressing themes ranging from the self & the other, the inner & outer world, the visible & the invisible, dream & reality.

Born in 1982 in Rosenheim, Germany, Roescheisen is the granddaughter of notable German artist Ernst Moritz Geyger (1861-1941). Deeply drawn to the iconography and symbolism of Medieval art and architecture from a young age, she graduated from the Elite University of Ludwig Maximilian, Munich, with a Master’s Degree in History of Art, Political Philosophy and Folklore Art (2005).

Her career in the arts begins in Munich and Paris, working with artists and galleries on the production and curation of works and exhibitions, in particular video works. Increasingly involved in the conception of the works yet entirely autodidact, she began producing her own works in 2012, staging her first exhibition in 2013 at Artcube Gallery, Paris.

Roescheisen’s work has been exhibited in galleries and institutions worldwide. Notable solo exhibitions include Tracing by Emotions, Boogie Wall Gallery, London (2021); Bridging Grey, Ki Smith Gallery, New York (2019); Black & Blue, Speerstra Gallery, Paris (2018); and What are you fishing for? MANA Contemporary Art Museum, New Jersey (2017). She has taken part in numerous group shows among which the 56th Venice Biennale (2015) in the context of the European Pavilion, where her work was shown amongst that of Daniel Buren and Yoko Ono; several group presentations at Pen + Brush Gallery, New York (2014—2021); and at Salon Berlin – Museum Frieder Burda, Berlin (2019). In 2016, she was named one of the top 10 emerging artists to follow by Time Out New York.

Since 2012, she has been continuously performing in Systema Occam by reputed French artist Xavier Veilhan, previously shown at the Delacroix Museum and Hermès Foundation, Paris, and the French Institute Alliance Française, New York, among others. Her 2015 video work, A Love Story, received wide international acclaim, conferring her multiple awards including the Award of Merit – Best Woman Filmmaker at the Best Short Film Festival (Los Angeles, 2015) and the International Award of Outstanding Excellence at the International Film Festival for Peace, Inspiration & Equality (IFFPIE, Jakarta, 2016), to cite but a few.

In the context of Roescheisen’s social and philanthropic engagement, she has donated works to numerous charity auctions, including those of the Leonardo di Caprio and Womanity Foundations. Her project #WhatBringsPeace (2016—2019), through which she invited the global community to reflect on the meaning of peace individually and as global citizens of the 21st century, has led her to collaborate with institutions worldwide, among which the United Nations Foundation and the BWM Foundation Herbert Quandt. Roescheisen has also been invited as a public speaker at the World Economic Forum (Davos, 2017) and the BMW Foundation’s Summit of Peace (Bogotá, Berlin).